If you would like to receive our regular Newsletter via email, please fill out the form below and click on the Submit button.  You may also use this form to unsubscribe from our newsletter emailing if you wish.  Thank you. 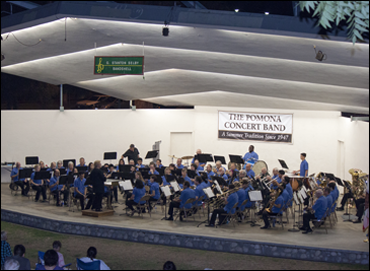 Dear Friends of the Pomona Concert Band and Supporters,

The Pomona Concert Band announces its 75th Annual Summer Concert Series to be held at the G. Stanton Selby Bandshell, behind the Community Center building in Ganesha Park, 1575 North White Avenue, on Thursday evenings at 7:30 p.m. starting July 7th.  The band is sponsored by the City of Pomona. This year the series will include eight Thursday evening concerts with the finale on August 25th plus one bonus concert.  All performances are free to the public, so bring you lawn chair, visit the band's concession stand or bring your picnic basket, and enjoy an evening of music.

The Pomona Concert Band is under the baton of Linda W. Taylor, Conductor and Musical Director, and Assistant Directors Dr. Jorge Garcia and Kerry Kline.  Band members come from Pomona and more than twenty surrounding communities to make music together.  The Pomona Concert Band was founded by G. Stanton Selby in 1947 as part of a local Pomona American Legion Post.  The band is celebrating its 75th "Diamond Jubilee" Aniversary this year.  The Band has represented the City of Pomona in countless events and performances over the years, including tours of Europe and Japan in 1985 and 1988.  The band represented the city in April 2015 with a stellar performance at the Association of Concert Bands Convention in Sacramento, California.

The opening concert on Thursday July 7th is titled "Symphonic Celebration" and will feature music written for the symphony hall.  The band will be directed by Linda Taylor, Jorge Garcia and Kerry Kline.  Mayor Tim Sandoval will be the Master of Ceremonies for the evening that will include "Light Cavalry Overture," "Let Freedom Ring," "Suite in Eb" and "Symphonic Celebration."

The second of the band's summer concerts will be Thursday July 14th with the theme of "Strike Up The Band," directed by Linda Taylor, Jorge Garcia and Kerry Kline and MC'd by journalist David Allen.  The concert will feature "Anthem for Winds and Percussion," "Teddy Bears Picnic," "Bright Lights," and Gershwin's "Strike Up The Band."

The band will display that "PCB's Got Talent" on Thursday July 28th with a concert that will feature many of our regular band members conducting the band on pieces they have chosen for the band.  We are very fortunate to have these talented individuals in our band and we want to give them a chance to shine.  We will feature guest conductor Emeritus James Lytthans, Stephen Klein who plays euphonium, trumpeters Christopher Northrop and Denny Duran-Flores, french horn player Karen Greenwood, percussionists Lucas Critchfield and James Thompson, and David Schaafsma from the tuba section.

On Thursday August 4th the band will present concert number five titled "Concert In The Park" directed by Kerry Kline and MC'd by Linda Taylor.  Kerry's choice of music will include "A Leroy Anderson Portrait," "American Riversongs," "What a Wonderful World" and "A Childhood Remembered."

On Thursday August 11th the band will feature a concert titled "Celebrating 75 Years of The Pomona Concert Band" directed by Linda Taylor.  The concert will celebrate the band's Diamond Jubilee Aniversary.  Selections will include "Diamond Jubilee March," "Soaring With John Williams," "Dances of a Shimmering Spirit" and "Highlights from Frozen."  The MC for evening will be Edmund Fry.

The Pomona Concert Band's final summer concert on Thursday August 25th is titled "Stage and Screen - America Sings" and will feature music that was written for Broadway, Hollywood and to celebrate our country.  Included in the program are "The Lion King," "Cats," "Mary Poppins Selections," "Selections from E.T." and will close with John Philip Sousa's "Stars and Stripes Forever."  The MC for the evening will be columnist David Allen.  Lots of great music for your enjoyment to close out the band's 2022 Summer Concert Series.

The Pomona Concert Band will present their special bonus concert when we host the Golden State British Brass Band at a special time and date on Sunday August 28th at 5:00 p.m. in the G. Stanton Selby Band Shell.  Conductor Jack Hollander will take the brass band through a wide variety of British band music along with many American favorites.  They have been a crowd favorite in the past   Don't miss this great addition to this year's concert schedule!

This year promises to be the best summer of music yet, so please join the Pomona Concert Band for their 75th "Diamond Jubilee" Anniversary of Music in the Park representing the City of Pomona. 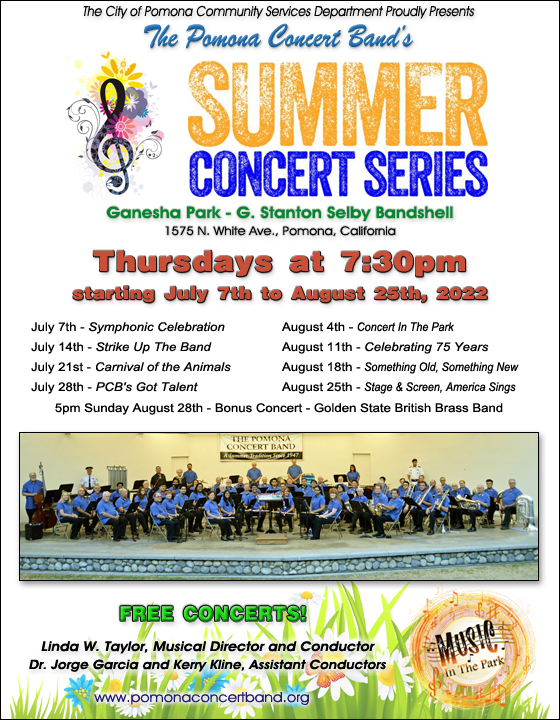